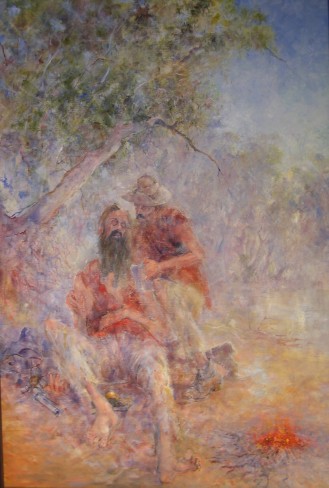 Each year Brian travels to the region where Burke and Wills perished. The paintings depict the story of the Burke & Wills expedition as he researched it.  The journey starting at Royal Park with mayhem and strife between the camels and the horses.  Travelling through Victoria New South Wales and South Australia. Leaving some members of the party at Menindee. Leaving the main party on the Cooper Creek, Burke, Wills, King and Grey travelled on to reach the coast. Salt Mr Burke was the indication they had a least reached as close as they were able before mangroves stopped them going any further.  On the return Grey died and the time taken to bury him the remaining three were late getting back to the “dig tree”   the waiting party having left a few hours before.  The attempt to follow were cancelled because the last camel died and there was no way to carry water . Burke & King left Wills in a shelter as he was unable to travel any further. They arrived back at the dig tree where Burke died.  King survived because the Aborigines looked after him and was eventually found by a rescue party.

These twelve paintings are for sale as a series. The proceeds will be donated to a charity yet to be announced.  Contact Brian with any queries.